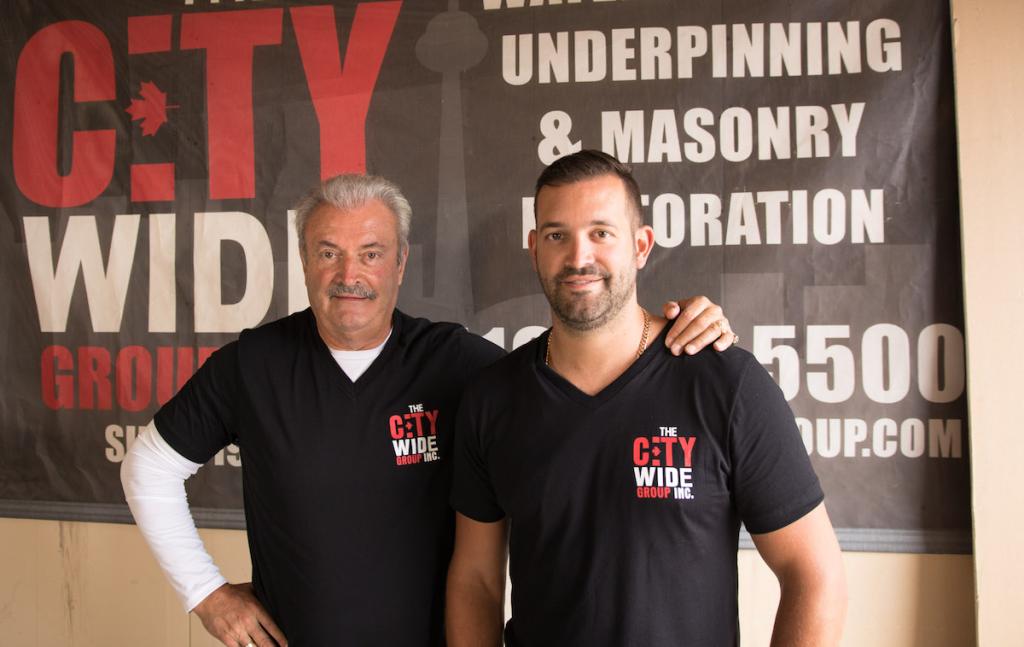 City Wide Group is a company specializing in residential and commercial basement waterproofing, underpinning, and drainage repairs in the Toronto (Greater Toronto Area) and in Hamilton, Niagara, Welland (the Niagara Peninsula). Family owned and operated, the company continues to grow under the leadership of Harry Cavan and his son, Chris. They are proud of the work they do and have plans to expand throughout the province. Here’s their story:

Harry Cavan was running a bindery business in Toronto when he met someone who would change his career path.  Pasquale Giardino was impressed by Cavan’s salesmanship and thought he would make a good addition to his construction business sales force. While Cavan was not immediately interested, having just obtained his pilot’s licence. Giardino was persistent and before long he and Cavan had created a strong team serving the Toronto area through A1A Construction. Within a few years, Cavan had turned the focus of the business to waterproofing basements, recognizing that there were not many other companies specializing in the area.

By 1974, City Wide Group was advertising heavily using flyers and the Yellow Pages. The company began growing by leaps and bounds. The company started to expand and he opened additional markets in the Niagara area.

“In 1995 City Wide received its first Consumer Choice Award which helped really propel the business,” says Cavan. The more people who become aware of the good ratings the company receives, the more calls they get for waterproofing projects.

Always a family owned company, Cavan’s brothers were initially involved as was his wife. Even now his sons are involved as well as one of their wives. They work in a variety of areas including sales, estimations, and clerical work.  They have 80-85 full time technicians who are carefully trained to do the required steps the way the company wants them done and to do so safely.

“When you dig around a property, you have to make sure it is shored properly because the soil can stay saturated. We also deal with chemically treated membranes so you have to be careful about the fumes. We place an emphasis on safety.” City Wide Group also insists the property be returned to the way it was before they started digging around the foundation, if not better. So, their technicians have had to learn about interlocking bricks, concrete, asphalt, and landscapes.

“Our people are trained the way we want the job done; there are no short cuts,” says Cavan. Many of the people have been with City Wide Group for 30-35 years and have brought on their family over time.

When Harry was asked about the company’s growth and development he said, “Success is not easy. You have to learn all the time; there is always something to learn. We went from using older technologies with tar and plastics to using rubber, double membrane sealing processes.” He says the company is also looking at expanding the commercial market where they offer the same high-quality waterproofing services.

Chris Cavan is one of those people who had the advantage of always knowing the field in which he wanted to work. His earliest memories are of constructing things and now he is actively building his family’s business.

Chris started off helping his Dad when he worked part time after school, weekends and summers. He literally started from the ground — digging ditches around house foundations — up, learning the specialized skills of basement waterproofing as he went. Eventually he went to George Brown College and graduated with Honours and on the Dean’s List with a diploma in Building Renovation Technology. While he did start an on-line sporting goods liquidation business selling to customers in the United States and internationally, he decided to focus on improving the online presence and marketing of the family business using his experience in marketing. Harry credits Chris with bringing a dynamic talent for marketing and sales to the company.

City Wide Group has been building and expanding its service area and will soon be offering its expertise in waterproofing basements to all Ontario residents. It’s been a natural progression, in the past 20 years of business they have added underpinning of foundations, concrete building and drain services to their range of services. They partner with other companies and recommend restoration experts to help people get their basements back into the comfortable living spaces they want.

This year’s early melt-off and heavy rains across Southern Ontario has meant increased demand for their services. They have received many calls from residents who are dealing with water in their basements and they’ve sent out technicians to do inspections and provide estimates. They are busy repairing foundations, applying waterproofing membranes and seals, dealing with damaged drainage systems — all part of the City Wide Group specialization.

“I take pride in the fact we bring peace of mind to homeowners and families by solving the problems they have with their wet basements,” said Chris. He pointed out that ideally a homeowner will have taken steps to protect their property by waterproofing the basement. It avoids the expense and loss of property that happens if water does seep into a basement. When, however, that isn’t the case, City Wide has concentrated on identifying and rectifying the root cause of the problem.  They have a long list of satisfied customers. In fact, they have won the Consumer Choice Awards for 22 consecutive years. On occasion City Wide Group has also had to sort out issues with other company’s work when they have failed to properly diagnose the problem.

As Co-Owner Chris has taken over more of the operations and management duties over the past five years and he is turning his attention to commercial property work. The company has a solid reputation in the industry is expanding its network of partner companies and working with property management firms to provide advice and services.

“The reputation of my family’s business is very important to me,” said Chris. “We stamp our family name on every job. No one wants to let the others in our family down. We certainly don’t let our customers down.”
City Wide Group is so confident of its quality work, they are one of the only companies in the field that offers a fully transferable life time guarantee on their work. So, even if a homeowner decides to sell his property, their warranty is still in effect. That’s the kind of branding that homeowners across Ontario can expect from City Wide Group.